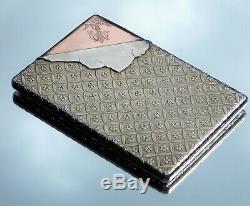 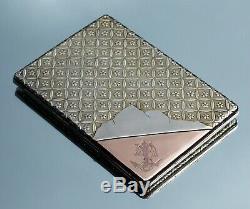 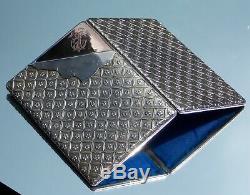 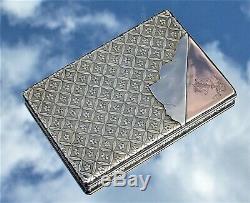 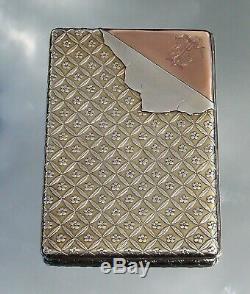 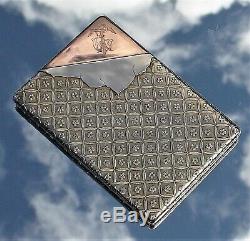 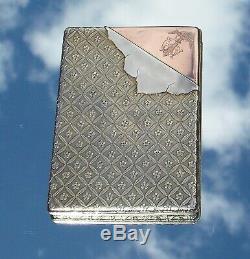 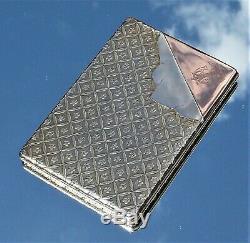 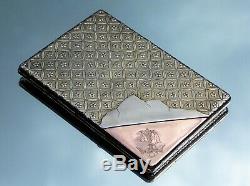 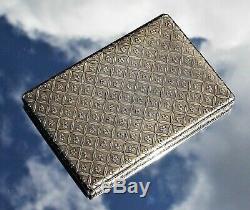 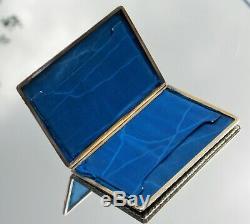 BEAUTIFUL BREATH TAKING RARE FINE QUALITY VICTORIAN FRENCH 18CT GOLD MOUNTED SOLID SILVER GILT CALLING CARD CASE French.... 97.7 grams This is a Beautiful Extremely Rare Fine Quality French Victorian 18ct Gold Mounted Solid Silver Gilt Calling Card Case, it was crafted in France circa 1850 making it nearly 170 years old, this wonderful Card Case is so very pretty, i have never seen one like it before, its breath taking, the detailing to the card case is absolutely stunning, it is also a very good gauge of silver for a card case weighing 97.7 grams, to the outside of this amazing Victorian card case you will see it has the most beautiful cast decoration to the solid silver body, it has beautiful cast leaf foliage creating almost a lattice design making wonderful cast squares in which sit the most wonderful little cast flowers i would say they are very pretty daisies, this is repeated on both sides and is finished with the most wonderful gold gilt finish, you will see there are still traces of how rich this gold finish would once have been, to the front top corner of this rare French Card Casse you will see the most breath taking design, it has been crafted to look like the corner of the solid silver has been peeled back to reveal an 18ct gold corner under the folded back silver, its stunning, this has been tested and is 18ct gold, it has an engraved entwined T E to the corner, on opening this wonderful rare card case you will see it still retains its rich deep blue watered silk interior in which your calling cards would have been placed.

The quality of the craftsmanship is superb. The picture show you just how breath taking this really is, this would have once belonged to a wealthy Victorian Lady and been used daily while out paying visits to many of her friends, this was many years ago when things were so very different. If this case could talk i bet it could tell some facsinating stories, to hold this rare card case is a pleasure, it is so very tactile and once held is hard to put down , you will not find another like this on the market its is extremely rare and of a very high quality, this does carry the french hallmarks though the maker is rubbed.

This will add something very special to any collection, my photos dont do it justice... The condition is wonderful with just some wearing to the interior silk, the hinges works very well you can feel the quality in your hand Maker...... As per above Rules for Calls and Leaving Cards A lady would start making calls as soon as she arrived in Town, to notify everyone that her family had arrived. The card was conveyed to the mistress of the house, who would then decide whether or not to receive the caller.

If the mistress was'not at home', it was a rejection of the visitor. A reciprocal card may be given to the caller, but if not presented formally, that usually meant there was no desire to further the acquaintance. Cards from visitors were placed on a silver salver in the entry hall -- the more impressive names displayed on top.

The trays had a pie-crust rim so the cards would not slip off. In less wealthy households, china bowls were used to hold cards.

For a first call, one was wise to simply leave the card without inquiring as to whether or not the mistress was at home. She left her own card, plus two of her husband's -- one for the mistress of the house, and one for the master. The names of grown-up daughters could be printed on her card when they accompanied her on a call as long as they were still living at home. A turned-down corner indicated that the card had been delivered in person, rather than by a servant. Some elaborate cards had the words Visite, Felicitation, Affaires, and Adieu imprinted on the reverse side, on the corners. So whichever corner was turned up, one of those corners appeared and explained the reason for the visit. Calls should be made only on At Home days. Days and times for these were engraved on visiting cards. A newcomer waited until she received cards from neighbors. It was then good manners to call on those neighbors who left cards. Formal calls were made following ceremonial events such as marriage or childbirth, and also as acknowledgment of hospitality. When an invitation to a church wedding, or a marriage announcement, is received, it is necessary to send cards to those in whose name it was issued and to the newly married pair.

Calls for condolence and congratulations were made about a week after the event. If intimate, a visitor may ask for admission.

If not, they inquired of the servant as to the person's well-being. Ceremonial visits were made the day after a ball, when it sufficed to simply leave a card. Or within a day or two after a dinner party, and within a week of a small party.

In large cities it is usual to leave cards when attending an afternoon tea. Occasions when other calls are obligatory. After a wedding breakfast, a luncheon, a dinner, a card party, or any evening entertainment to which one has been invited, a call should be made after the event whether one has accepted or not. Times were allocated for each type of call. Morning calls' were made in the afternoon.

Ceremonial calls' were made between three and four o'clock, semi-ceremonial between four and five, and intimate calls between five and six--but never on Sunday, the day reserved for close friends and relatives. Visits were short, lasting from twenty to thirty minutes. If another caller arrived during a visit, the first caller left within a moment or two. There are many reasons for delayed calls.

Illness in the family, absence from town, many occupations, may prevent the best-intentioned persons from making calls. If a family was temporarily leaving the area, they wrote P. (pour prendage conge, meaning to take leave) on their cards when they called.

If an acquaintance calls after a long delay it is a duty to welcome her cordially... A note of reply must be written in acknowledgment of an invitation. Callers should always be provided with cards. A gentleman should carry them loose in a convenient pocket; but a lady may use a card case. No matter how many members of the family you call upon, you send in but one card.

Where servants are not kept, and you are met at the door by the lady herself, of course there is no use for a card. If you call upon a friend who has a visitor, send in but one card; but if they are not at home, leave a card for each. Calls of pure ceremony are sometimes made by simply handing in a card.

Thanks for looking All Antique silver items will show some signs of wear, which only adds to the history of the object..... The item "EXTREMELY RARE VICTORIAN FRENCH 18CT GOLD MOUNTED SILVER GILT CALLING CARD CASE" is in sale since Saturday, August 17, 2019. This item is in the category "Antiques\Woodenware\Treen". The seller is "silver_antiques_uk" and is located in Ledbury. This item can be shipped worldwide.